Submitted by vincent@ehrstrom.com on Tue, Dec 26, 2017
Feel free to change the width and height values above to suit the page in which you are embedding the BikeCAD applet.
Tweet 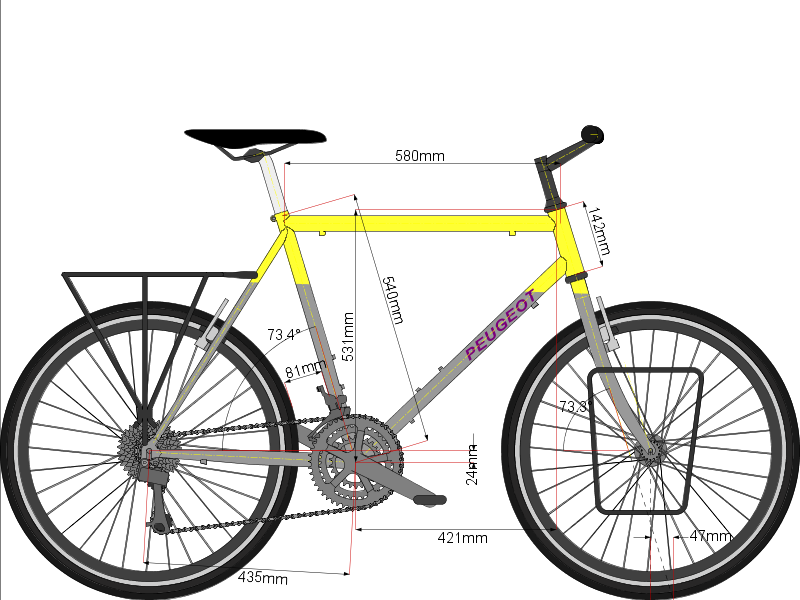 This bike is an early MTB sold in France by former bike giant and world famous Peugeot. The frame is built with Reynolds 531 (incl stays) and its fork is a Tange CroMo unit. The lug-less frame is assembled with a direct brazing technique which displays no brazing material at tube junction. A very nicely finished frame. It is painted in a dual color scheme light grey and lemon yellow with the distinctive Peugeot signature multicolored decal on the top tube (not able to add those on drawing). The world famous Lion decal is stuck on the head tube, like all Peugeot bikes, any time anywhere (just the shape of the Lion changes over time). I have ridden this bike over 29 years, first as a MTB fit with 26x2.1 tires, but now I have gradually enhanced it for a mixed use: Trekking and gravel; occasionally MTB when I go pass hunting in the Alps. I carry it loaded with paniers. ISince this is a steel frame/fork, I've added brazed-ons for fitting a low-rider, an extra bottle cage (planned) and I also had a bike stand plate brazed-on. It is very sturdy, and handles very well loaded. Never had a problem with the frame but obviously I gradually replaced most of the groupset. It was originally a Shimano Deore LX, of which only the FD and the rear hub remain. The steerer is a 1" unit from TTT, which is quite rare since the head front tube is a 34 diameter. The fork crown is therefore MTB sized, but the top part of the headset is a very rare EC 34 with a 1 inch steerer. I love being able to adjust the bar height, which Aheadset does not allow. The rear rack is solidly mounted on brazed eyelets that came standard on the bike. I still use a stainless steel wired rack that feels and looks as good as new. (The picture does not reflect that). I tour with a Brooks Professional saddle which I replace by the original gel saddle in city riding mode, being afraid to have my Brooks stolen or damaged by rain. I changed the front wheel and built it on a Shutter Precision dynamo hub, Exal ZX19 rim and DTSwiss Champion spokes. I have't counted the kilometers on this bike but reckon it's a very decent number. They were done on mixed terrain: trails, double tracks, gravel roads and roads (incl. city riding) some of which, in the early days ridden carrying children on a child seat and/or pulling a children's trailer.