Submitted by vincent@ehrstrom.com on Wed, Dec 27, 2017
Feel free to change the width and height values above to suit the page in which you are embedding the BikeCAD applet.
Tweet 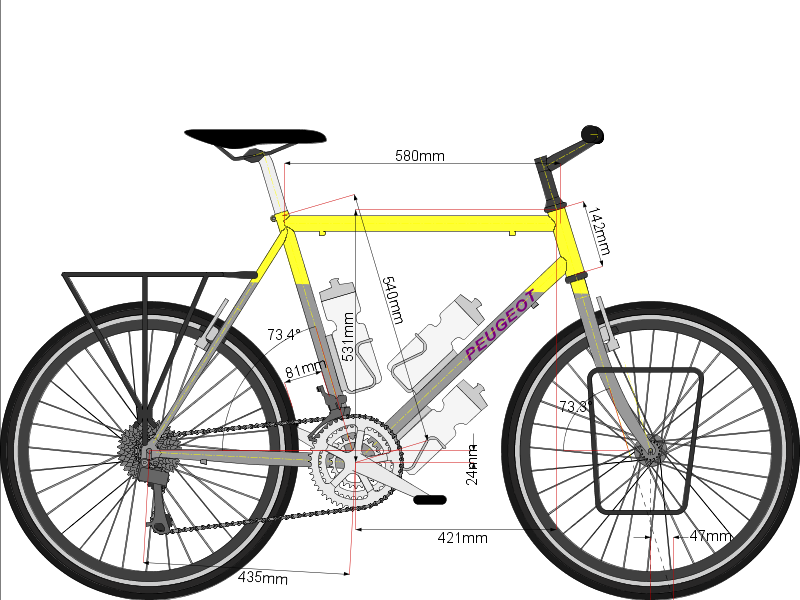 This bike is an early MTB sold in France by former bike giant Peugeot. It is built with Reynolds 531 frame (incl stays) and its fork is a Tange CroMo unit. The frame is very nicely finished. I have ridden this bike over 27 years, first as a MTB fit with 26x2.1 tyres, but now I have gradually enhanced it for a mixed use: Trekking and gravel, occasionally MTB when I go pass hunting in the Alps. I carry it loaded with paniers. ISince this is a steel frame/fork, I've added braze-ons for fitting a low-rider, an extra bottle cage (planned) and I also had a bije stand plate brazed-on. It is very sturdy, and handles very well loaded. Never had a problem with the frame but obvioulsly I gradually replaced most of the groupset. It was originally a Shimano Deore LX, of which the FD, the rear hub only remain. The steerer is a 1" unit from TTT, which is quite rare since the front tube is a 34 diameter. The fork crown is therefore MTB sized, but the top part of the headset is a very rare EC 34 with a 1 inch steerer. I love being able to adjust the bar height, which Aheadset does not allow. The rear rack is solidly mounted on brazed eyelets that came standard on the bike. I still use a stainless stell wired rack that ifeels and looks as good as new. (The picture does not reflect that). I tour on a Brooks Professional saddle. My next big project is to rebuild the front wheel on a Shutter Precision dynamo hub. I have't counted the kilometres on this bike it's a very decent number. Done on trails, double tracks, gravel roads and roads (incl. city riding) and also carrying children on a child seat and pulling a children's trailer.