A friend just pointed out the new rack design feature. I played with it a little bit and thought that I'd offer a few comments. I do want to say that it is a nice new feature, and will help people visualize the bikes more.

1) On front porteur and handlebar bag racks it is common to measure down to the eyelets from the fork crown instead of up from the dropouts. It would be nice if this were offered. Nitto and Velo-Orange handlebar racks and Haulin' Colin Porteur racks all measure this way for instance.

2) It would be nice to provide FY (coming down from the crown though) and height over the tire/fender and have BikeCAD compute H. Right now there is a juggling act between the three.

4) Most rack intersections don't turn into bungie hooks. It would be nice to be able to add stay that just terminate at the mounting tabs or at another stay. I can get close with these parameters:
R1 = 0, YA = 1 (note that YA = 0 has some sort of drawing bug), RA = 0, HA = 0.

5) Backstop angle should default to HTA or to 90, those are the two most common options used on custom racks.

Finally, it would be great to be able to draw forks with fork crowns, instead of sort of hacking it with unicrown fork designs.

Thanks for listening,
alex

Thanks for the helpful comments. Those are all good ideas.

Next, while BikeCAD admittedly doesn't collect fork dimensions in quite the level of detail that you might want for fork fabrication, you can model the square shape of a fork crown with a similar degree of detail as you can a unicrown fork. To obtain the fork profile below, I've set E=0 and H = A - 2 * J 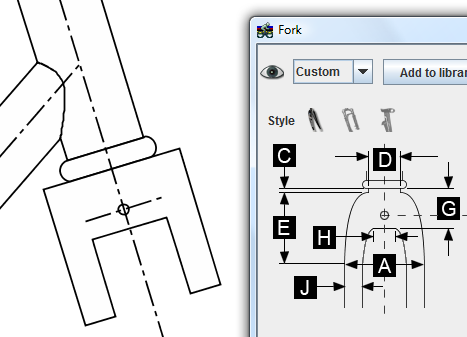 Thanks for showing me how to

Thanks for showing me how to turn off the hooks.

I'm just using the free BikeCAD, so I hadn't seen that fork view. The part that I have a hard time with on forks with the unicrown designer is seeing how much clearance I'm leaving myself under the fork crown and above the tire, and it looks like that fork view might help. It also usually takes me a while to figure out the parameters to get normal steel fork blades (27x20mm, 14mm at the dropouts, nice taper) on there. I'm very picky about fender clearances, so when I draw up designs myself I have a lot of detail in the fork crown dimensions to figure out the best axle to crown.

A couple of thoughts on pricing. I am a hobbyist builder who builds 1-2 bikes per year, so the $350 for the Pro version is hard to budget. Today I often sketch ideas in BikeCAD, then draw up my final design in regular CAD software (which takes me about an hour) to get all of my angles and miter lengths. A subscription model where I either paid per year (say $50) or per bike (say unlimited saves to a single file for one month for $25) for Pro features would make it a lot easier for hobbyists to afford BikeCAD (and would give Pro builders a chance to try out all of the features on a trial basis). I'm also a professional software developer and would prefer to pay you for your good work, just at a rate that makes sense for my usage levels.

Feel free to contact me offline (alex at phred . org) if you would prefer to talk about this off of the forums.