I would like to know how to put a shock onto my bikes.

If you wouldn't mind, could reply to this

There is currently no formal option to add a rear shock in BikeCAD. However, I see that you've recently created the following model which includes a representation of a shock. 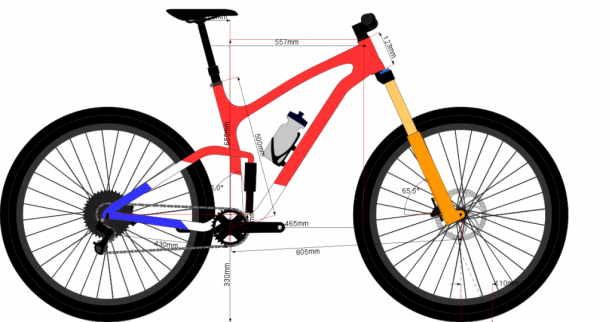 This model was based on someone else's model which would explain how despite the fact that your own model features a shock, you may not be sure how it got there in the first place. There have been a lot of creative approaches to representing shocks, so this isn't necessarily the only way to do it. However, in the model above, the seat stays were designed to attach to the down tube. The seat stays also had two bends added to them to represent the linkages of a rear suspension swing arm. Finally a coupler was added to the seat stay. The coupling feature was added to allow for the representation of things like S and S couplings which can be used for splitting a frame in two for more compact storage. However, in this case, the dimensions of the coupling was adjusted so that it actually looks like a shock.