First of all- thanks Brent!

Is it possible to bring your previously defined templates into the newer version.
I finally have it all my display and dimension templates dialed in, plus all the standard parts that I have created: Forks - stems - cranks - ect...
Can I simply copy my templates folder from the software data file from one to the next? Or do I risk loosing some new functionality?

doh! yes that is exactly what

doh! yes that is exactly what I do :)

alright- figured out how to

alright- figured out how to tension the belt. I was going to ask about that. I like this feature.
So... when is the Tablet App coming?

Updating BikeCAD and tensioning the belt or chain

I'm glad to see that you've found the instructions on transferring settings from older versions of BikeCAD Pro. That's worth knowing if you've done a lot to customize your copy of BikeCAD Pro.

Also glad you've found the info on tensioning the belt or chain. That's one of the many exciting enhancements available in BikeCAD version 9.

Thanks also for your interest in a tablet app. That's something I'll have to investigate. I'm encouraged by the fact that some newer tablets are supporting Java.

Yes, you can copy configuration files from 7.11 directly over to 9.0.

As explained in the video tutorial on updating BikeCAD Pro, it is strictly optional whether you copy any configuration files over at all. It's only if you've done extensive customization in the old version that you'll want to transfer those settings over to the new version.

The only risk of copying configuration files over from a particularly old version of BikeCAD is that preferences you had in the old version may not be what you'll prefer in the new version. For example, in version 7.11 zooming is done with a slider bar. However, in version 8 and 9 you can zoom with the scroll wheel on your mouse. The default properties.xml file for version 9.0 removes the slider bar from the interface making for a cleaner layout.

In terms of standard components such as saddles, stems and handlebars, those can also be copied over from 7.11. However, be aware that standard stems from earlier versions of BikeCAD do not have any data on the diameter of the handlebar clamp as 1" was always used by default. In version 9.0 we can define a specific handlebar clamp diameter, so version 9.0 stems contain more complete information.

Similarly, you may want to copy dimension templates over from an older version. However, be aware that older dimension template files will not have the ability to turn on or off dimensions that are new in BikeCAD version 9.0.

thanks for the info - the

thanks for the info - the updte looks nice

at the new Version 9.0 i donÂ´t can find the option for the chain stay and seat stay brake hole measurments. At the Version 8.1 it was possible to see the measuremts at the sketch.

Yes, you'll find the dimensions have moved. You can now find them as shown below at: Tubing >> Seat stays >> Bridge >> Rear axle to seat stay brake hole. 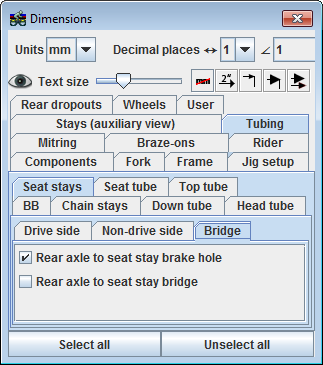